A Monday morning moment of zen, courtesy of an old NYT article (on a free Airplane/Butterfield/Dead show in NYC's Central Park on 5/5/68) that I dug up at lightintoashes' behest. 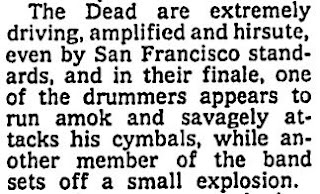 The other chuckle is that many of the hippies in attendance were apparently throwing "lollipops" onstage to show their appreciation.  Crazy kids.