This is a fantastic aud tape of a Keystone show that you could probably get along fine without ever hearing.  Just being honest.  But there are a couple of things:

First, go John Angus and Scott Hart!  They put down a few other JGB shows on tape that month, and this one is a particularly sweet specimen: rich, full, balanced sound with just enough depth and flavor to really please these ears.

Second, the band is actually playing quite well, just content to cruise along in a lower gear.  Keith sounds like he’s in particularly good fettle, foreshadowing the wonderful interplay between him and Jerry in the more well-known 10/28/78 Seattle show.  Everyone sounds fine tonight, locked in and focused, but it's still a mellow, slippers-and-sweatpants kind of show.  There's not really much to review, actually.  Highlights, if you’re looking, would be a surprisingly tasty Love in the Afternoon (surprising since I generally dislike that song), a very nice Mission in the Rain, and the neat curiosity of Lee Oskar blowing some discrete harp on Gomorrah and Midnight Moonlight.

Third, and this is what struck me about the tape, there’s a telling little moment at the end of the first set.  This was a shorty warm-up gig tucked in between the Dead’s big “return from Egypt” Winterland run and a little JGB jaunt up to the Pacific northwest.  After a big Winterland blow-out a few days earlier, I’m guessing that only the most hardcore Keystone Social Club regulars had it in them for another JGB show (the fourth one that month, btw, plus two more in Palo Alto).  Were expectations high?  I really doubt it.  All of those shows had been short, mostly each with well under two hours of actual music, but tonight someone wasn’t having it.  After Jerry announces the break, Angus & Hart let the tape roll for another minute (inadvertently, I assume, since they’re pretty tight with the pause button between songs); someone hollers out, loudly, “You’re floundering in the snow! That was too short!” (at least, I think that’s it), prompting a couple more cries of “too short!” and “play more!”  At least one sage stoner intones, “it’s great, it was perfect, no problem.”  Then side B of Little Feat’s Dixie Chicken comes on the PA (“Fool Yourself”) and I’m wondering who was fooling who.  JGMF has written at length about the economics of Garcia shows w/r/t professionalism and bang-for-your-buck, with some particular attention to some pretty skimpy 1985 shows from a pretty low time in ol’ Jer’s personal life (see here among others).  I was a little surprised, though, to hear someone calling Jerry out on this in 1978.  Then again, though someone calls out “boring!” during a languid Russian Lullaby, so maybe it’s a case of the food was awful and the portions were too small that's at work here.

Fourth, I’m realizing the the narrative has always put Oct-Nov '78 as a pretty low point for all concerned parties: burned out and tired, the Dead embark on an east coast tour that is cut short when Garcia is hospitalized, the Godchauxs’ marriage implodes, Keith's playing continues to go downhill, and then Keith is apparently fired from the JGB for dipping into Jerry’s stash (per Kahn).  Yet, on paper, a bunch of interesting things were happening: not only does Lee Oskar pop up at a couple of those Winterland shows (plus again on New Years Eve) and at this JGB show, but so apparently does Will Scarlett at two Keystone shows that we don’t have circulating tapes for (see gdsets.com for 10/11 & 12).  Two harmonica players in one month?  Earlier in October, before all this, Garcia reunites with Merl Saunders for a one-off gig with Merl’s band (which, in addition to being apparently a dry-run for Reconstruction, also sports some of the hottest playing Garcia did that whole month).  Then, as I assume you may already know, two of those Pacific northwest shows, 10/26 and 10/28, are among the best of the year and also happened to be shared gigs with Bob Weir’s band, whose keyboardist Brent Mydland was being keenly watched by all concerned parties (meanwhile, with Keith’s playing on 10/28 being widely praised, I wonder if he felt like he was essentially auditioning for his own job?).  And then there's the JGB show on 11/3/78 that's famous for its totally out of left field and out of character performance of Miles Davis’ So What. [edit: also can't forget the first acoustic GD performance in eight years that happened pretty off-the-cuff in Chicago on Nov 17].  That’s a fair bit of extracurricular activity for what I tend to assume must have been a pretty dreary time for all involved parties, but hey, maybe it was that post-Egypt buzz making them all try a little bit harder.

And hey, I’m listening to 10/24 yet again while I type this, and y’know, it’s actually not a bad little show.  Maybe it’ll grow on you. 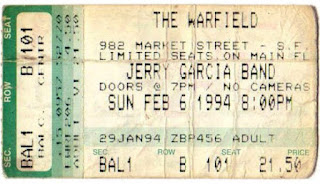 "Very late era" (94-95) JGB is a corner that I'm guessing most listeners don't wander into.  '93 JGB usually never fails to ring my bell, but by most accounts the big guy's final decline came hard and fast, so I tread cautiously in those final years.  While there's a kind of dark beauty in the brief flashes of inspiration that broke through the fog at the very end, it's a game of diminishing returns for me to dig academically through shows that warrant, at best, a response like "this doesn't sound too bad given the shape he was in."  Time, strength, cash, and patience, ya know.  To be fair, some of it really isn't bad, but some of it is just awful.

I recently stumbled upon a real keeper, though.  Having run out of fall '93 JGB shows to listen to (um, other folks also have this problem, right?), I dug into his next run of Warfield shows in Feb of 1994.  These were the first nights out for new drummer Donny Baldwin, after David Kemper's dismissal.  Frankly, another thing that this gives this final period an unpleasant whiff is Kemper's inexplicable firing, after 10 years of exemplary work in the engine room (more info).  All I know about his replacement Donny Baldwin is what I've heard of him on these JGB tapes (and, um, the other stuff you can learn from Wikipedia).   But, to be honest, he sounds great: if anything, he doesn't sound different from Kemper in any major way, but -- as Kemper himself pointed out -- just keeping this particular engine running was more challenging that it looked ("one foot on the gas, one foot on the brakes" is still one of the best descriptions of this band's sound that I've heard).  The rehearsal that (I presume) was called for by Baldwin's arrival clearly did Garcia some good that weekend.  His singing and playing is pretty strong for all three of these shows.   As JGMF has noted, Garcia seemed to be paying more attention to his singing in this era, compensating for his raggedly worn chops with some extra attention to his phrasing and inflections, and it shows throughout these three shows, even with his voice past its late-period prime.  Three stellar quality aud tapes by Warfield super-tapers Chuck & Linda Vasseur exist, and (unusually) there are circulating sbds for 2/5 and the first set of 2/6.  Stick with the Vasseur auds, I say (although, see below).

2/4, the first night, is a pretty strong show, though not much jumps out as amazing or worth revisiting.  They sound tight, and any slight tentativeness seems to come, understandably, from everyone letting Baldwin settle into his groove.  The one major high point is a steaming Lay Down Sally jam:  Garcia's chugging along, sounding fine, and then decides to hit his distortion pedal and something clicks into place.  The audience feels it, Garcia responds, and you get one of those brief moments of aud-tape perfection as everything clicks into place.  Nice work, old man!  I also quite liked Strugglin' Man and Stop That Train.  He doesn't sound like he has it in him for Deal, though (either on this night or the next), and the second set mostly never gets into high gear.  It does seems like a bold move to break out Don't Let Go on Baldwin's first night, but his comfort level with turning the groove loose isn't there yet, so it stays pretty earthbound.

2/5 is more up-and-down.  There's nothing bad, but the inspiration doesn't seem to be there.  Notably, Garcia breaks out the first I'll Take a Melody since 1990 (which he would play only more time) and does a decent job with it.  He works up a good froth in a surprisingly hot Get Out My Life Woman and, later, in Tore Up, and sings wonderfully on a fine Lucky Old Sun.  Any lover of ol' man Jerry really going for it should check out how he belts out "lift me up to paradise!" around 3:25 in.

2/6, the final night, is what I would strongly recommend to the skeptical.  Is this the last great JGB show?  Garcia sure comes out swinging and doesn't let up.  His setlist choices play a big part my feelings for this one, as he's pushing himself and avoiding the obvious.  There's a fine jam in Cats, a transcendent first solo in Mission (and notice how Garcia takes more control over the tempo at the beginning), sharp stuff in Let it Rock, and a near perfect Like a Road.  Even Breadbox, a tune whose jam doesn't usually do much for me, gets a very strong, focused work-out.  The closing Everybody Needs Somebody blazes by at a faster past than the '93 leviathan versions, but not a note is wasted.  Amazingly, the energy is kept up for the whole 2nd set -- even some of the more powerful '93 shows tended to peter out in the last lap around, but not tonight.  Nice Harder They Come, a wailing Money Honey, and a textbook example of how sweet that pitch-shifting effect could sound in The Maker, which goes an extra few feet for good measure.  Lazy Bones was one of those late-era left-field cover choices, but even this is taken at an ideal tempo, with Kahn's extra long bass solo as the only blemish of the show, unfortunately.  Don't Let Go appears again, and although Baldwin still hasn't loosened up enough to let it soar, Garcia blazes through 17 minutes of it, tearing things up on his old wah-wah pedal.  I'm not enough of an effects geek to know for sure, but he seems to have brought it back in late '93 (see 8/14/93, another blog-worthy show that's coming someday), and he usually meant business when he turned it on.  He means it tonight!  A rare Gomorrah is a great call for the final ballad and Tangled Up in Blue is the perfect close to an excellent night.

There's always an element of added excitement at hearing the old man working with a full tank of gas this late in the day, but speaking as objectively as I can, I still say 2/6/94 is a fantastic 90's JGB show.  One last little moment to savor: on the sbd of 2/5, after a less-exciting version of Breadbox, one of the backup singers whoops out, "I love that song!" and Jer cheerfully responds, "yeah, that was great, man."  Maybe they weren't nailing every song, but they sure sound like they were having fun -- by 1994, I get the sense that that just wasn't the case very often, so it feels special to hear.