This isn't exactly a rave review, but this show's setlist inspired some curiosity while I was puttering around at work, and, frankly, I'm ready for the beach myself.  The FOB aud quality is very, very good.  And who doesn't like their Dead with some palm trees in the background?


1982 shares the dubious honor with 1986 as being my least favorite year of the Dead’s “early Brent” pre-coma period.  Unlike other fallow periods, there’s nothing egregiously “wrong” with it, but -- for me -- most of the performances occupy a kind of gray zone between the sharp, creative playing of 1980-81 and the ragged, hare-brained (and, yes, hirsute) intensity of 1983-84.  Jerry was still keeping it together, Phil wasn’t quite back in the saddle yet, Brent ditched his older electric piano for a faux-acoustic one, and it all sounds, I dunno, a little too polite; I don't want to say autopilot, but there's not a lot of sweat in the music.  There are certainly a few shows that prove me wrong, but they’re outliers.  And yet, perversely, I’m periodically drawn back to it, partly to see if I can pin down what exactly I don’t like about it (who has time for that? I do, apparently) and partly just for the pleasure of rooting around for some undiscovered gem.  This show, sporting an attractive setlist, isn’t exactly that.  But it’s a nice show.

The first set is model '82: no clams, no shamefully bad vocals, a decent performance all around, and almost none of it stuck on me.  Althea has a heavy groove, but the only other standout was the surprising (unprecedented?) call of Truckin’ as the set closer.  Huh?  Not only that, but they rock it for almost 11 minutes and, a couple of slips notwithstanding, it's pretty strong.  Towards the end it almost feels like they’ve forgotten that they’re not deeper in the 2nd set, before yanking back for a big explosive finale.

To be fair, they did get creative with some setlist choices in 82, often structured around Playing in the Band.  Here’s a vintage example of a “Playin’ sandwich” kind of set: they forego an opening rocker and dive right in, swim around in it for a bit with an airy, vaguely ominous feel: clear and nicely textured yet shallow waters, perhaps.  It sounds like China Doll is coming, but Jerry switches things up with China Cat instead, another very unusual selection.  Not bad!  The guitars are way up in the mix here, making for an extra changly jam, and Phil seems sufficiently roused by the time Rider comes around.  Ol’ Jer belts out a good “headlight” line, and at the end they make a well-timed drop right into Estimated.  Not much to note here; it’s a typically fine one with one flub coming out of the bridge (“like a swiss watch,” Bob quickly quips) and a decent jam that trails off into the early 80's standard Jerry-less jam with Bob and Brent (and briefly Phil) splashing around for a few miunutes.  Not bad as those things go.  A brief Drums, a briefly noisy Space, a long Wheel complete with lengthy prelude and a pretty outro (an ideal groove for this show, actually), back into Playin’, then a goofy Bob closing twofer, and it’s all over now, baby blue. 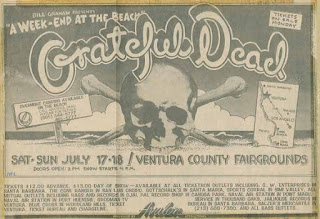 (these shows, incidentally, were the first of several years' worth of "weekend at the beach" shows in Ventura)