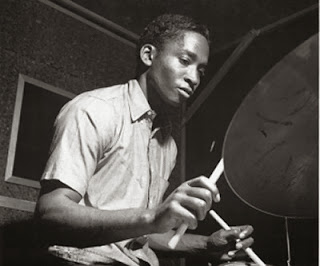 RIP to Donald Bailey (10/15/2013), who was the drummer on many of Jimmy Smith's early classic Blue Note albums, which means he nearly invented a style of soul-jazz drumming that became foundational/blueprint stuff for many of us (and certainly Merl and, by extension, Jerry)

Ethan Iverson of Do The Math has a typically excellent tribute that's enlightening in several ways.  Reading about the particularities of Bailey's drumming is fascinating, but I also had no idea that Bailey was one of Coltrane's first call substitutes for Elvin Jones!  And that there's a 1963 bootleg of Bailey playing with the Coltrane quartet... time to hit the interwebs.

There's no direct GD connection of course. While Jerry, Phil, and Bobby were all particularly open-eared listeners, I'd be surprised if any of them were really digging Jimmy Smith, who must have seemed fairly un-hip to the beatnik crowd of the early/mid 60's (but I've been wrong before).  Bailey had relocated to the west coast in the mid 60's, though, so there's certainly a chance that one of them came across him playing in a club.  Kreutzmann, I would imagine, must have known Bailey's work on some level, and I'm sure Pigpen had a Jimmy Smith record or two.  But the Jimmy Smith/Don Bailey combos were certainly one of the foundations that Merl Saunders built his early career on, so the indirect influence of this style on Jerry's early solo career is worth a passing mention.