Jerry Hahn was a guitarist who was active in the 60's San Francisco jazz scene.  His first big gig was with saxophonist John Handy's group (perhaps not well-known to many casual jazz fans today, but Handy was big at the time, having been signed to Columbia by John Hammond), and then with rising star Gary Burton.  Hahn's own debut (Are-Be-In, 1967, for Arhoolie) touched on the same jazz-raga-rock vibe as stuff like Butterfield's East-West, Gabor Szabo's Jazz Raga, or Pat Martino's East.  In 1970, he released the cult-classic The Jerry Hahn Brotherhood, by his group of the same name, on Columbia, which to this day has still never been reissued.  The JHB seems to have worked a lot around the Bay Area, and opened for some major acts on the Fillmore circuit, and Hahn also got the call to play on Paul Simon's debut (post-Garfunkel) album.

Three years later, Hahn recorded a 'solo' album, Moses, for Fantasy Records.  The band was his JHB rhythm section -- Mel Graves on bass, George Marsh on drums -- and Merl Saunders as a last-minute addition, on organ and synthesizer.  Moses is a good record, though not one that I personally return to a lot as a whole album.  Stylistically it's a little all-over-the-place: the title cut (which I can listen to all day) is wonderful, a midtempo funky groove with a vibe that would have fit Garcia/Saunders perfectly; ditto the cover of Donovan's "Sunshine Superman."  Hahn's originals have an edgier, fusion/jazz-rock feel; two of them are 'suites' that jump around even more.  Then there are a few 50's-era standards, played well but comparatively straightforward.  It's kind of an odd mix when taken as an entire album, imho.  But all of it is very good.  imho, if they had cut less material and just stretched out more, it might be even better -- most of the tracks are under five minutes.  Like the JHB album before it, Moses has so far never been reissued in any digital form, anywhere. 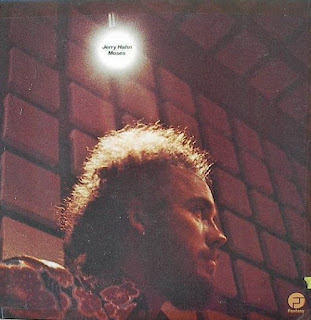 So what does this have to do with this blog?  I am curious about the brief intersection of Jerry Hahn and Jerry Garcia and am wondering if there was more to it than is generally known.  I am also interested in this album as it relates to Merl Saunders' own involvement with the scene around Fantasy Records.  But there are no concrete conclusions to draw; so for now, consider some inchoate observations:
So I dunno: some speculation, some more insight into the musical prowess of Merl Saunders, some interesting musical digressions.  Never a bad thing.  I would certainly like to learn more about Merl's relationship with Fantasy Records/Studios and the influence, direct or not, that it had on the Garcia/Saunders band -- starting, I presume, with Tom Fogerty, and extending into the general influence that the label's output had on Reconstruction (more later, someday).  But, for now, it's just another piece of the puzzle.
Posted by Nick at 11:43 PM