This show first popped on my radar a while back when I was thinking about Garcia playing outdoors sans GD, but I only just got around to giving it a close listen.  A couple things:

First: good gravy, this is a really nice aud tape!  The whole terroir thing is happening in a serious way here.  One of the gold standards for this period, in terms of sound quality, is the well known 3/6/76 recording made by Pat Lee & friends at Seattle's Moore Theater, but Don Wolfe and Matt Williams' 3/3 tape may be an even more satisfying listen in terms of atmosphere.  The Lane County Fairgrounds Auditorium is more like a big vaulted shed holding around 800ish, and while the tapers succeeded in capturing the intimacy of the space, this is one of those tapes that still inspires a cognitive dissonance between what you know and what you're hearing: to me, this sounds like I'm experiencing the JGB at a house party or maybe a small bar, in the company of a few friends, all very enthusiastic and very attentive.  One great moment of many is when Donna steps up to sing her gospel feature, "A Strange Man," which was brand new to most of the crowd.  They love it, and she has them in the palm of her hand: maybe one of the better Donna vocal moments from this era of the JGB, made all the more sweet by the particularities of this great tape.

Second: in terms of performance, this is a pretty solid early '76 JGB show.  Granted, that's a period that tends to rub many folks the wrong way because of the slowness of the material.  At times I agree (3/6/76, I'm looking at you), but typically I can get down with this stuff just fine.  All we have of this night is the second set, but it's still a satisfying 90 minutes of music. An early "The Way You Do the Things You Do" has a delightful energy to it, and dig how Keith and Jerry slip in a subtle hint of I-VII for a sec in the jam (the "Fire on the Mountain jam" or Eb-Db in this case).  "Friend of the Devil" is divine; "I'll Take a Melody" and "Mystery Train" are satisfying, but not standouts for the period, and the Rolling Stones' "Moonlight Mile" is done about as well as they did it -- I don't mean to sound back-handed, but it's a tough song to pull off!  Much better, however, is this great version of "I Want to Tell You," which they played only a handful of times in early '76 and then dropped abruptly.  Garcia returned to it for a few post-coma shows in 1986-87, then brought it back with the Dead in 1994-95, but these 1976 versions are the real deal, with solid vocals, energetic delivery, and a few minutes of jamming that finds a nice little space to nestle into (more I-VII/"FOTM" again, somewhat similar to the jam in "Lonesome & A Long Way From Home").  The segue into "Sisters and Brothers" is sweetly done and makes for a nice little combo.  A final rarity closes the show, their take on Ray Charles' "Talkin' 'Bout You," not quite as hot as some of the Legion of Mary versions, but par for this lineup.

Finally, if you read the not-so-fine print on the poster, you may notice that the show was put on by Acidophilus Productions/Springfield Creamery, which may ring a bell for any committed deadhead.  Garcia's connections to and performance history in Oregon probably warrant a small book of their own, and the Creamery folks also produced the "Second Decadenal Field Trip" [and potluck!] on the 10th anniversary of their first one (see Blair Jackson), the 1983 and 1984 Hult Center shows (in Eugene), and maybe more.   Unlike the more storied fairgrounds that are a few miles down the road in Veneta, the Lane County Fairgrounds are, I believe, in the middle of downtown Eugene, so this could hardly have been a psychedelic backwoods tribal stomp.  From a pragmatic standpoint, this show may have been just a midweek add-on to two bigger gigs (a Friday in Portland and a Saturday in Seattle), which wasn't unheard of.  There's an Old & In the Way listing for 5/8/73 at Churchill High School (Eugene) and Garcia/Kahn shows at South Eugene High School in June '82 (JGMF), all of which were adjacent to larger gigs in Portland.  Other Dead/Garcia trips to the northwest seem to have been either bigger "professional" productions or college gigs (besides those Hult Center shows), and I have no idea what other events, if any, were organized under the Creamery's auspices.  But I suspect that there must be some story behind Garcia's playing for the Springfield Creamery on a Wednesday night in downtown Eugene, and I'd love to know what it is.


And the biggest question, of course, is... was this guy was in attendance? 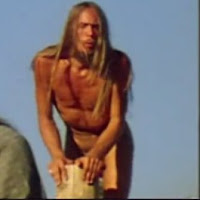