Apropos of that post on the Great American Music Band, I just saw that bassist Buell Neidlinger has died after 82 years of a life well lived.  This fantastic tribute by Richard Williams has only deepened my awe at the breadth of his work: Neidlinger not only played with both Monk and Ornette at the Five Spot, but also on little ditties like, oh, "Hotel California" and, um, "Y.M.C.A." (according to jazztimes, anyway).  Not to mention three small gigs with our resident hero, who was trying something new on an off-night during at the height of his powers.  I can only begin to guess at the conversations backstage.  Just incredible.

OK, back-to-back RIP posts means it's time for me get cracking.  Some stuff is in the works.

[edit, Sept '18: I came across this 1975 album cover with Buell Neidlinger pictured on the far right and couldn't resist adding it here.  An oft-repeated accolade is that Neidlinger was evidently Stravinsky's favorite bass player.  Beat that.] 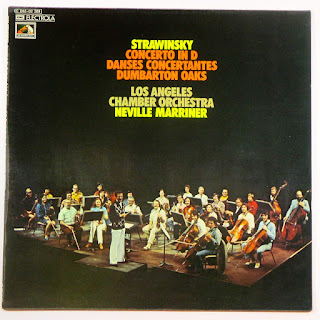