Yeah!  Managed to slide in one more before 2018!  JGMF did the work years ago to establish the historical particulars of these gigs, so I won’t rehash those too much: here are his listening notes on 6/4/74, 6/5/74, and 6/6/74.  Notably, all three of these shows feature Merl’s son Tony Saunders on bass instead of John Kahn.  From a historical standpoint, Tony’s presence puts these in a grey area regarding the persnickety issue of “what band is this?,” a question blurred by the fact that Garcia was an apparently frequent guest at Merl’s own gigs around this time.  The particularities probably won’t be teased out any further than JGMF has already teased them.  I’m still tickled, however, by the image of Garcia rolling up to some bar with his guitar and amp in his trunk, then a week later playing at the Oakland Coliseum.

I wish I could find some older pictures of Tony and Merl, btw.  His first paid gigs as a teenager were with Garcia & Saunders.  This little pic of the two at Fantasy Studios is all I could find, from Tony’s site: 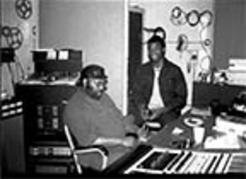 Gigs at the Lion’s Share were more laid back and off-the-beaten-path: most tapes of the few circulating shows there all have that flavor, and 6/4/74 may have the most of it, with a rich warm Betty Cantor recording to capture it all.  The uniqueness of some of the material is likely what marks this show for most folks, but the expansive nature of the playing earns its place on the list of the best of Garcia/Saunders 1974 shows.  Darben the Redd Foxx was a tune by saxophonist James Moody that seems to have had some pull with jazz musicians in the 1960’s but nevertheless seems like a totally left-field choice for this band.  They lay down a smooth, straight-down-the-middle midtempo swing that rolls along for 17 luxurious minutes; Garcia understandably sounds a little tentative at first, but he digs in and is on top of things by the time his second solo comes around.  Many heads don’t appreciate Martin Fierro’s playing and while he did have a tendency to overblow theatrically at times (which I imagine was probably much more effective in person than on tape), there’s none of that here: Fierro is totally in his element, unraveling cool, focused lines through his solos.  A very cool and unusual sound for these guys.  Tony and Bill Kreutzmann (I’m pretty sure it’s him) lay down a supremely bouncy groove to start Expressway, but halfway through they all fall into the trap of cycling endlessly through that descending chord progression “jam” with increasingly less and less to say, with Fierro and Garcia repeatedly deferring to the other and noodling around to no great purpose.  The rhythm section wins again, however, on a great Second That Emotion, better than most from this time.   Even better still is the magic they conjure on Merl’s Wonderin’ Why.  I always like the feel of this song, but this one is particularly satisfying as Garcia and Fierro weave circles around each other in the first main jam; their interplay here makes this one of the best versions I know.  A bluesy, blustery Soul Roach ends the first set.

To underscore the jazz club ambience, they pull out another rarity in Miles Davis’ classic All Blues, and Garcia et al follow the form of the tune, each taking a few choruses over the simple, timeless changes, at first resisting the urge to stretch.  But after returning to the melody, Garcia and Fierro start wandering off the page as Merl tries keeping it rooted to the changes, resulting in a gentle freeform tug of war that sounds great.  Martin brings it back home with another blues melody at the end: I can’t tell if this just some standard blues riffing or another actual tune, but it’s a neat twist to end another long, relaxed jam that only could have happened at the Lion’s Share.  Local blues guitarist/singer Alice Stuart comes up to sing New York City (an “original” that’s not too far removed from Jimmy Reed) and the band sound great chomping down on a straight 12-bar blues.  The Harder They Come has a choppy, funky groove that works well, and they do better than usual with this one until a little “when/how do we end this?” snafu at the end. Then Dixie Down ends things on a soulful note.  It has its ups and down, but I’ll forgive a show like this its warts: much like 7/5/73, it may not rise to the tighter standard of other ‘best’ shows of the period, but its perfectly realized vibe and groove make it a real stand-out of the year.

6/5/74, another fine Bettyboard, is missing its first set (the full tape seems to exist since we have a tantalizing setlist from, I presume, Rob Eaton).  Alice Stuart returns for the second set, this time with her guitar in tow — I wonder if she was the opening act for these two nights?  But, first, things get off to bumpy start: Fierro does no one any favors by test-driving some extreme electric effects on his flute on La-La which is, frankly, unlistenable.  The wahwah pedal was a component of his sound in 1974-75 (he, along with numerous other saxophonists, followed Eddie Harris’ example of using electric effects on their acoustic horn), but the effects really don’t work here.  Ouch.  Stuart evidently arrives onstage midway through Finders Keeepers: you can hear Betty adjust Garcia’s guitar in the mix @6:37 and Stuart takes the final solo.  It’s nothing all that inspired (and probably not what she usually played), but hearing another lead guitarist onstage with Garcia in this era is most unusual -- let alone a female lead guitarist at all -- so this certainly deserves a nod for historical importance.  Stuart doesn’t sound totally familiar with Dixie Down either, but she dishes it out on the blues chestnut Kansas City, adds a nice chicken scratch rhythm and some nice licks to another fine Harder They Come, and is in her element holding her own with Garcia on That’s All Right Mama.  Ultimately this set is more a curiosity than a must-hear, but this must be one of the last times on tape that we hear Garcia casually trading leads with another guitarist like this.  With some big doings on the horizon with that other band of his, Garcia must have been having a blast.

PS: after all this, I realized that there’s a video of Alice Stuart and her band at Winterland from 2/2/74 — haven’t checked it out yet, but I’m looking forward to.
http://www.concertvault.com/alice-stuart-and-snake/video/id-do-it-for-you_-1665489645.html 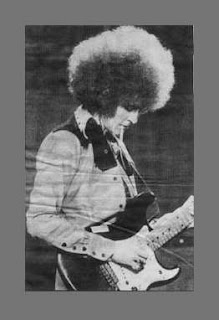 On 6/6/74 they were back at their homebase in Berkeley, with Tony still subbing for Kahn.  Rather than a Bettyboard, we are most fortunate to have a top-notch Louis Falanga aud recording that’s one of the best he made, with mics set up right by Garcia’s monitor (the soundman’s voice is audible a few times) yet capturing the whole band with a nice balance.  After some atmospheric banter about a buzzing light dimmer, a loose and somewhat sloppy Someday Baby lazily gets thing rolling, and Expressway follows a similar trajectory as 6/4, although Garcia leans into it harder as things start to sag and drives it home with a forceful ending.  From there on, however, it’s all gravy.  He Ain’t Give You None sits happily in a fat, wide groove, and My Funny Valentine (which is prefaced by Garcia, off mic, “we haven’t done that in a little while”) is a picture-perfect textbook version of this band’s signature jazz tune  without a stumble or any hint of dissonance or weirdness — not that I mind it when they took this one outside, but they really seem focused on getting the most from the material here.  A heated Second That Emotion (check Garcia’s final solo!) ends the first set.  The tape cuts back in with some spacey fooling around and Garcia chuckling loudly at Fierro’s noodling before the real bombs drop.  Merl’s My Problems Got Problems, only ever played a handful of times, was never done better than this: the groove is incredible right from the drop, and by 10 minutes it becomes so unmanageably funky and I won’t detail the kind of moves I’m making while I listen.  Talk about a stone cold killer!  21 minutes compared with the puny 8 minute version from a few weeks later.  As they futz around afterwards, Jerry says “oh hey, let’s do that, Tony… let Martin start it” and off they go into Darben the Red Foxx again, but with a different, more march-like, staccato rhythmic feel (more like the arrangement on various jazz records) and a tense, edgier feel overall.  Unlike the more leisurely 6/4 performance, Fierro brings it back to the melody after 11 minutes, then they float off into spacier realms, flirting with all-out dissonance over a terse, sparse groove for another 7-8 minutes before they play the melody again and end it for good.  A hare-brained and high-energy How Sweet It Is rounds out the night.  Incredible!  As tasty as the whole show is, the 40+ minutes of Problems/Darben is some of my favorite playing this band did during that great year.

Then, y’know, like 36 hours later, Garcia was at it again with the Dead throwing down one of the most bananas Playing in the Band jams of all time (and, incredibly, Louis Falanga was on the scene again -- the man deserves a medal!)  But I’ll leave you to peruse that one on your own.  All in a day’s work for 1974!