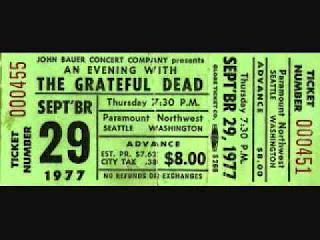 …so, given what Garcia said in the interview about this show, of course I couldn’t resist checking it out: 9/29/77 at the Paramount Northwest in Seattle, a brokendown old 4000-seater that the Dead had also played in ’72.  What the bandmembers reportedly liked or didn’t like doesn’t usually line up with what I like or don’t like, but I can never resist checking out a left-field recommendation like this, particularly when its a show I had ignored in the past.  Overall, it’s a lovely Bettyboard tape of a solid ’77 stomper, nothing too fancy, save for two remarkable things:

The first set closes with an unusual powerhouse trio: Sugaree, Let it Grow, and Franklin’s Tower.  Um, whaat?  The Sugaree is marred by a nasty cut in the second jam which axes some prime moments of excitement, but there’s still plenty to enjoy.  Let it Grow is a nice exemplar of their fall ’77 strengths, and is remarkably good given that they hadn’t played it in almost a year (the last time was 10/2/76).  That's no small feat, but they must have been feeling good enough to roll out another 17 minutes of Franklin’s Tower!  It bounces and rolls along like the gentler ’76 versions rather than the raging spring ’77 ones, but it’s such a nice surprise and they sound so fully locked in that I loved every minute of it.  Despite some long cruising stretches, there are plenty of moments to treasure: try Jerry crooning around 13:30 over Donna’s and Bob’s soft backing vocals.

The first half of the second set is unremarkably well played, but the post-drums segment is worth a look and imho is the highlight of the show.  Truckin’ had recently returned to duty at Englishtown a couple of weeks prior, so it’s a little stiff at first, but they open it up into a strong jam with two nice peaks, then change gears and ease down into a great Stella Blue as smoothly as can be.  Stella is beautifully executed, with a gorgeous solo and a final jam that begins with Garcia on slide for a bit, then slowly brings up the intensity for another surprising yet silk-smooth transition into GDTRFB — the effect is similar to the more famous Stella>NFA from 12/19/78, if somewhat less powerful.  They’re flying high now, and after a satisfying AWBYGN coda they break off a final Johnny B. Goode and a sweet Uncle John’s encore, two songs that I hold to be signs that the band was acknowledging that something unusually special had just happened.

There are plenty of ’77 shows that most anyone would understandably reach for before this.  But if — like me — it’s taken you this long to catch up with this one, you might find yourself pleasantly surprised by how sweet the band sounds during that last lap around.  According to Garcia, so was the band.
Posted by Nick at 7:07 PM