I'm interested, as always, in how context colors your perception of situations and people you're experiencing third-hand, years after the fact.  It's funny how these things start: lately I've been listening hard and frequently to Duke Ellington's classic Money Jungle (which has now been a 20-year endeavor: "don't understand it too fast") and just today I realized that it was produced by Alan Douglas.  Alan Douglas is an interesting guy with a very interesting discography, with some amazingly varied and fantastic albums to his credit -- more on that in a minute.  His connection to the Garciasphere is slight but significant: he produced Garcia's first non-GD side project, the enigmatic Hooteroll? album, originally credited to Howard Wales & Jerry Garcia.  As I made that connection, starting with Douglas rather than Garcia, it struck me as pretty interesting that a maverick jazz producer made a record with Garcia.  But that's probably not how most other folks think about the relationship, if they even think about it at all.  But I think it's worth thinking about. 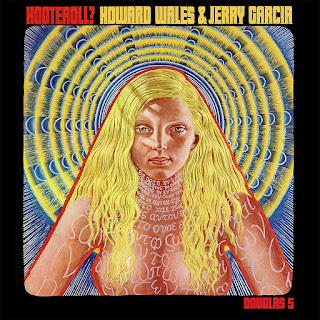 Actually, most people probably associate Alan Douglas primarily with Jimi Hendrix's posthumous legacy: Douglas is the one who originally had control over Hendrix's unreleased recordings and, controversially, began issuing Hendrix albums in the 1970's that replaced some of the original tracks with overdubs by other musicians.  Douglas also brokered one of the biggest "what if's" in rock & roll, Hendrix's never-realized session with Miles Davis (who apparently demanded $50,000 at the last minute), as well as a planned live recording with Gil Evans (which Hendrix didn't live to see). This all makes sense, given Douglas' jazz pedigree.  He also produced John McLaughlin's remarkable Devotion album with Larry Young and Buddy Miles, made in Hendrix's orbit in early 1970.  Prior to that, Douglas had a decade's worth of top-drawer jazz under his belt.  He recorded a week's worth of Eric Dolphy sessions in 1963 that were boiled down to two great but relatively unheralded LP's, Iron Man and Jitterbug Waltz, and had worked as the head of the jazz division at United Artists, producing a number of significant records: my own personal favorites include Money Jungle, Bill Evans' & Jim Hall's Undercurrent (another all-timer in my book), Art Blakey's 3 Blind Mice (while chopping parsley, naturally), and Mingus' live Jazz Portaits (aka Mingus in Wonderland).   Later, in the mid-70's, he was also responsible for a seminal early documentation of New York's jazz loft scene on the Wildflowers series of records.  Douglas clearly had an ear for cutting edge, important black music: another accolade is that he had the foresight (and the guts) to record what was arguably the first "rap group," the Last Poets in 1969, and another important proto-rap album, Hustler's Convention by Lightnin' Rod.

In 1967, Douglas founded his own eponymous multimedia imprint and released recordings and books by Lenny Bruce, Malcolm X, Timothy Leary, John Sinclair, and Allen Ginsberg, as well an early anthology of writing on gay liberation.  In the days before the infinite discography of the internet, I remember discovering more and more albums with Douglas' name on the back: I didn't really know what his story was, but he seemed to be an indicator of good quality, and I formed a composite picture in my mind of a messily eclectic label with a hodgepodge of artists and styles.  Not everyone saw it that way, though: Bill Laswell, another maverick and wildly eclectic producer from the next generation, said:

"I recognized that [Douglas Records] was a very consciously radical label.  Of course, there was a lot of radical music going on at that time, but Douglas had a wide range of releases that were all linked by the fact that they were pretty extreme or political, things that would wake people up.  It was probably one of the most creative labels from that period." (The Wire)

I realize all of this seems very far removed from Jerry Garcia, but Douglas was clearly a mover in the industry with a maverick spirit and an ear for the underground, so it's not all that surprising that at some point in 1970, he was hanging out in the Bay Area and met Garcia via Ron Rakow.  The story goes that Garcia invited Douglas down the Matrix to catch his gig with Howard Wales, and Douglas checked it out and immediately offered to record them, with the okay of Joe Smith from Warner Bros (who had the Dead under contract).  I find this particularly striking, given the company Douglas was keeping -- Hendrix, Miles, McLaughlin -- and his relatively high ratio of important recordings to forgettable ones.  He must have heard something in Wales & Garcia that put them in that league -- and, judging from the live Side Trips release, I wouldn't disagree!  Hooteroll? doesn't seem to warrant much more than a footnote in Douglas' legacy, which may be understandable given the foggy circumstances around it.  Joe, Corry, and lightintoashes have done admirable work parsing out the knowns and unknowns (links to various blog posts collected here at jgmf), but the full picture is still a little blurry.  Interestingly, jgmf also details another GD connection involving Douglas (again via Joe Smith) installing the recording studio in Mickey Hart's Barn, apparently with plans to record a Hart/Kreutzmann project that ultimately became Hart's Rolling Thunder album, though Douglas isn't mentioned at all on the release.
[edit: or maybe not? once again, lightintoashes is on the case]

Given Garcia's insularity and the Dead's famously thorny resistance to working with outside producers (with the sole exception Keith Olsen in 1977, who was about as far from Alan Douglas as one would think), it's intriguing that one of Garcia's few productive meetings with anyone so far removed from his circle was with Douglas, as brief as it was (and, technically, it was Wales' deal anyway).  Contextually, of course, we tend to situate everything around Garcia and the Dead and view outsiders' involvement through that lens.  In the case of someone like Alan Douglas, I think it's both interesting and informative to treat Garcia as the footnote, rather than the other way around.

Alan Douglas died in 2014.  Some more reading material on his career:

a fine obituary by the great Richard Williams:
http://www.theguardian.com/music/2014/jun/18/alan-douglas

a New Yorker piece focusing on his earlier jazz recordings (and source of the above Ellington pic):
http://www.newyorker.com/culture/richard-brody/postscript-alan-douglas

a 1995 interview, mostly re: Hendrix and the Last Poets:
http://www.me.umn.edu/~kgeisler/ad.html

see also Douglas' own website (not as complete as you'd think) and his discogs page (which also appears to be missing some things).