A friend came by last night for a little listening session with a handful of German electronic records, including Stockhausen's seminal work Kontakte (the 1968 Candide lp, if it makes a difference).  I think I'd heard it before, probably in a cursory "isn't that interesting" way during some college music survey class, but oh man, my mind was good and thoroughly blown by it last night.  One of my summer projects is to read and listen up on Stockhausen.  I know he's a big deal, but my firsthand exposure to why he's a big deal is pretty scant.  Time to do some homework! 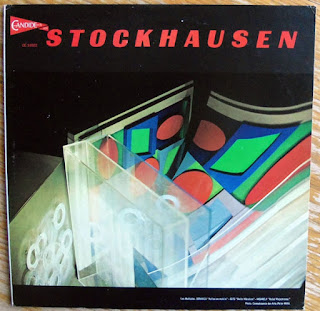 I also then remembered that Phil Lesh recommended Kontakte, in the same breath as Ives' 4th Symphony and Coltrane's Africa/Brass, when asked for some pieces of music that deadheads should be checking out.  Stockhausen was a big influence on Lesh and the Dead, but just saying that is kind of a truism: Stockhausen was a big influence on pretty much everybody.  The Stockhausen/Dead connection is worth some deeper excavating, but I'm not going down that rabbit hole right now.  Later, maybe.

After my friend left, I was in a electronic state of mind, so I had a nightcap with the atmospherically weird and wonderful "Water Torture" from Herbie Hancock's Crossings, the second album by his groundbreaking band Mwandishi.  Then I also remembered another off-hand link between the Dead and Stockhausen, via Hancock himself.  A few months ago I'd read his new-ish autobiography, Possibilities, and there's this bit when he's talking about the first time he heard Stockhausen:


"When I first heard those sounds [Stockhausen's earlier piece Geseng der Junglinge], I felt drawn to them, though I didn't really investigate how he'd created them, since I wasn't interested in making electronic music myself.  Stockhausen's work was often categorized as classical, but it fell on a continuum of avant-garde music that intrigued me, a continuum that stretched from Stravinsky and Bartok all the way to Jerry Garcia." (Hancock, 104-105)

OK then!  It's not often you see ol' Jer casually mentioned in the same company as Stockhausen, Stravinksy, and Bartok.  It's even more surprising because Hancock mentions throughout his book that he very rarely kept up with what was happening in rock & roll at all (although nowadays he's no stranger to crossover collaborations with all kinds of rock/pop stars).  The connections between Hancock and the Dead are actually pretty thin: I'm sure some of the band were aware of Hancock's music, and the Garcia/Saunders band shared a bill with Hancock at least once, but I think that's about it in terms of actual links.  A couple of other amusing things jumped out at me while reading Hancock's book, though:
Stockhausen, the Grateful Dead, Herbie Hancock.  Where was I going with this?  Great minds think alike, I guess.
Posted by Nick at 12:10 PM