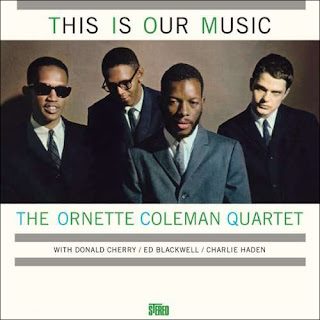 Many jazz and music writers will write about Ornette Coleman more knowledgeably and eloquently than I can, so I will just share a few thoughts.  Coleman belonged to the "first name is enough" echelon of jazz giants, so I will refer to him as countless others have: Ornette.

Ornette was a true maverick genius of American music, and I'm fully conscious of the overuse of the word genius.  If a genius is someone who does something genuinely innovative yet wholly obvious and necessary in hindsight, then Ornette fits the bill.  From the start he had a clear vision: make music that sounds sounds beautiful and honest, regardless of whatever convention or pattern you may break in the process.  It's not exactly rocket science, yet at the time the idea was absolutely radical and divisive -- it still is.  Unlike other pioneers of "free jazz" (Cecil Taylor comes to mind), Ornette's music was also wholly inclusive: maybe it wasn't always approachable to those who preferred the conventional way, but Ornette's jazz never felt completely out of reach, never exclusive or closed off to non-believers.  It felt too real.  It wasn't confrontational and it wasn't explicitly reactionary: it was "folk art" in the most sophisticated sense.  Miles Davis was a contemporary who also warrants the "maverick genius" tag, but Miles' thing was always to push relentlessly, unapologetically forward, refusing to look back at what he left in his wake.  Ornette's music grew and changed over the course of his 50+ years, but it never felt like he was trying to leave anything behind.  It defied that narrative of "progress" and "development" that jazz critics love to map onto long careers like his, but it also never felt like he was being nostalgic or locked in the past either.  And it's no exaggeration to say that he completely changed the course of jazz in a way that almost no one else did: he rearranged the priorities, and folks like Miles, Coltrane, and Mingus on down changed what they were doing after Ornette's music hit.  Yet, for all of his maverick and revolutionary spirit, he was no isolationist: his music has always been about communication and community, always an ensemble music where the ensemble always remains just as much in focus as any soloist (I even chose the pic above with this in mind).

I didn't get it at first.  My father had the landmark Shape of Jazz to Come record and I listened to it as a kid and wondered what was going on.  So like much other "challenging" music, it wasn't until I got to see Ornette in person that it suddenly made sense.  This must have been around 1997 or so, and it was a reunion of Ornette with his original bandmates Charlie Haden and Billy Higgins at Lincoln Center in New York -- sadly, all have left us now.  I'm not being hyperbolic: it really was life-changing in a musical sense.  All of a sudden, "free" improvisation made sense.  It just seemed perfectly natural: three cats playing the music as it changes, grows, and moves around before us.  I had never heard anyone outside of the Dead play music in that way before.

The influence of Ornette shouldn't come as a surprise, though it wasn't talked about as often as influences like Coltrane or Charles Ives.   Weir said that the Dead were listening hard to Ornette in the 60's, and Miles Davis himself even reported that Garcia liked Ornette.  But just listen: every Dead jam that took it outside of the normal bounds owes a little something to Ornette's conception of music.

Blair Jackson's got the story of how Garcia hooked up with Ornette for 1988's Virgin Beauty album, with some extensive quotes by Garcia.  Some more pertinent background info is at deaddiscs as well.

But tonight, I'm breaking out the Atlantic box set, the Golden Circle trios, the amazing Science Fiction album, Dancing In Your Head and Of Human Feelings by the Prime Time band, all the way up to his final "official" album Sound Grammar that coincided with his Pulitzer Prize.  Long live Ornette!