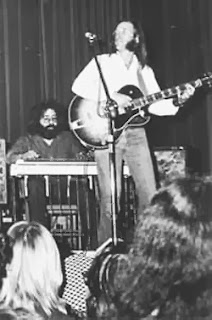 I just saw a post about Doug Sahm's 1972 Thanksgiving Jam at the fine Aquarium Drunkard blog. As you may well know, Jerry, Phil, and (possibly) Billy all performed that night, and the recording has made the rounds for ages. I haven't listened to it in ages myself, but I remember it sounding much like you'd expect: a bunch of talented dudes drinking beer and jamming on a bunch of old country, r&b, and rock standards -- very much in the vein of Sahm's great Doug Sahm and Band album. A fun evening, but not a major deal in the Grateful Dead cosmology. Leon Russell was the other major guest star alongside a host of Austin locals, including guitarist Hank Alrich as well, who was nice enough to leave this comment at AD:


Doug was late to the gig. Jerry got asked if he wanted to start without Doug. Jerry said, “Let’s wait until Doug’s here, and we have a full band”.

I loaned Leon my Strat for the evening and he promptly stuck a cigarette under the strings at the headstock and burnt a memory mark into the guitar.

I’d been hanging backstage as part of support (“Anybody got a guitar I can use?”) when during a brief lull an AWHQ friend and cohort said, “Why don’t you go up and play your guitar? Everybody else has.” So I did, and as Leon kicked in to “A Hard Rain’s a Gonna Fall” rain began to fall on that old, big metal roof. This was before we’d gotten the underside insulated with spray-on paper foam, and the sound of the rain was the perfect touch to the intro. I tend to play more quietly than most on electric guitar, and when I was called for a solo Jerry turned down to make sure I got across. That’s the kind of jamming buddy he was.

It was an awesome night early on in what was already becoming a legendary venue. Youngsters lament some oldster’s ongoing affection for certain aspects of Austin’s heritage. Truth be told, they are clueless. Either one was there and can understand, or one was not and probably does not. Another truth is that there is nothing today in Austin’s famous music scene that compares with Armadillo World Headquarters, the venue that put the city on the international live touring map.

A lesser reported factoid is that Jerry was in the studio with Sahm almost a week later back in San Francisco. Two tracks are buried away among the host of bonus material on Rhino's Doug Sahm box set The Genuine Texas Groover, which appears to be long out of print. I don't know if this material is available elsewhere, so just in case, here's a link for the two tunes at Wally Heider's, 12/2/72. Interestingly, David Grisman is on the session as well, making this a rare pre-OAITW Garcia/Grisman sighting.
Posted by Nick at 11:48 AM